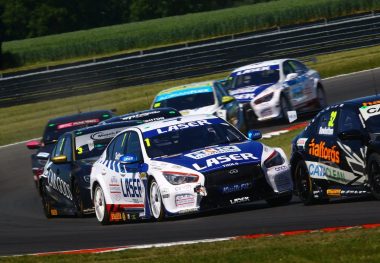 Ash Sutton has hopes of building on his fine start to the BTCC season. Picture by Mike Inkley.

The 27-year-old, who represents Southam-based Laser Tools Racing’s biggest hope for silverware, demonstrated his star quality by winning the second of a three-race weekend in Norfolk, and taking second in the final outing to earn valuable points on the second weekend of the season.

Sutton says the team benefitted from the struggles experienced during qualifying – in which he placed 15th – to make the changes to the car needed to gain better race pace.

“The championship lead is just the icing on the cake as the car had been mega all weekend, but what happened in qualifying changed how we had to approach things,” he said.

“Hopefully the results will reward the team for the effort they put in on Saturday night to change the engine.

“We had to make a lot of changes at the weekend to deal with the changes in the tyres and the weight, and it’s great that we are back on top of the standings.”

However, whilst warning that his team shouldn’t get too carried away looking at the current standings, Sutton feels that momentum is building nicely ahead of their next outing at Brands Hatch on June 26 and 27.

“We clawed it back here in the same way we clawed things back at Thruxton,” Sutton added.

“But the season is long and there is plenty more racing to come before the trophies are handed out.

“I think there will be lots of twists and turns, but we’re in a good place now heading for Brands Hatch.