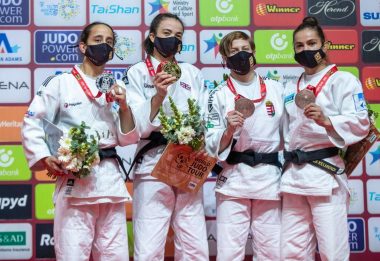 GOLD medalist Chelsie Giles has paid tribute to her native Coventry Judo Club after scooping a gold medal in the women’s -52kg category at the Tel Aviv Grand Slam in Israel last week.

The talented 24-year-old produced a couple of shock in her weight-class en route to her victory, beating the hosts’ Gili Cohen in the showpiece final after stunning Olympic and two-time world champion Majlinda Kelmendi from Kosovo in the semi-finals – the top-seed in this year’s event.

Reka Pupp, Fabienne Kocher and Gefen Primo were also dispatched in the earlier rounds, proving no match for the rising star.

It is the latest example of Giles’ growing stature in the sport and a win which will only boost her world ranking of 17th further, with the 2019 European Championships bronze medalist admitting that it had always been her intention to gun her way to the top prize on offer going into the tournament.

“I feel like a lot of people support me and believe in me so to come here and prove to myself that they’re right is a really good feeling,” she said.

“Jamie [Johnson, national Team GB coach] has always believed I can do it and I managed to pull it off against the best in the world.

“My home club, Coventry, is the biggest support and I get messages all the time. They lend me so much spirit and I want to make them proud.

“I like seeing Neil Adams [two-time Olympic silver medalist] on the tour, as he is from Coventry too, so it’s a little boost to feel I’m a positive part of his legacy as well.”

For those who have experienced Giles’ growth first-hand, the delivery of a stellar performance to eventually pin Cohen and submit her opponent in two minutes and 16 seconds will have come as little surprise, although her coach Johnson viewed the Grand Slam win as a major shift in the mindset of the Coventry judoka.

“It’s the best I’ve seen her fight, she’s had five Ippon wins, including beating the Olympic champion, it was just the belief she was lacking,” he said.

“She needs to believe and then deliver and she did exactly that [in the final].”