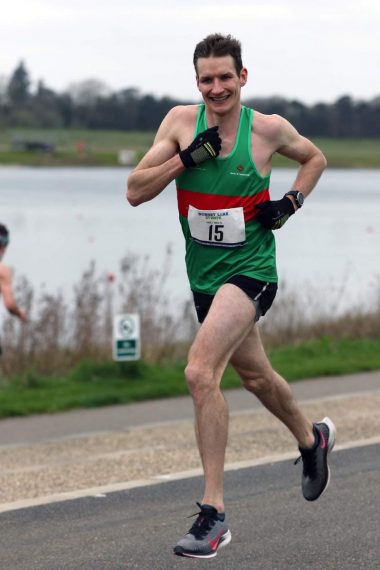 Ian Allen was back breaking records for Spa Striders in his opening event of 2021.

LITTLE time was wasted by Spa Striders after the United Kingdom’s lockdown restrictions were recently eased, as members competed in a number of events nationwide and across the globe.

A contender for the most extravagant outing had by a Strider over the Easter weekend was Kevin Baskerville, nowadays a resident of Abu Dhabi, who took part in the Al Ain Zoo 10k race in the United Arab Emirates.

And while the event got underway early in the morning, temperatures of over 25 degrees greeted Baskerville and Co in the Middle East, though this did not stop the Spa man from finishing in under 50 minutes – ending with a time of 49:13.

In doing so, he was the 13th-fastest male runner to complete the run.

Closer to home, Ian Allen, Chris McKeown and Kat Robertson all featured in the Dorney Marathon in Buckinghamshire – the first UK event this calendar year that the club have featured in.

The trio impressed in their trek around the Eton Dorney Rowing Lake, but none more than Allen – who shone with a scintillating time of two hours, 26 minutes and 34 seconds.

This result not only placed him second overall, but earned him a club record for a marathon and shaved over 15 minutes off his previous-best time.

His teammates McKeown and Robertson were also impressive, the former going four and a half minutes below his previous best to finish in two hours, 43 minutes and 20 seconds, whilst the latter went above and beyond to take 23 minutes off her record result in three hours, 13 minutes and 55 seconds.

The achievement of Spa Striders’ sole female runner were made all the more impressive, perhaps, by news that she earned herself a place in October’s London Marathon.

Finally, in the Ilmington 10k race, a pack of five Striders resumed the Tempo Events series in commendable fashion.

Simon Parsons was the leading Spa man, coming home in a time of 43:33, followed six minutes later by Jason Hemming in 49:50.

The Strider’s female contingent then completed the quintet, with Lorraine Parsons and Natalie Jackson – acting as a guide for veteran racer Maggie Bowes – running across the finish line in 57:02 and 2:00:44 respectively.