Stratford's adaptive squad back on the river

STRATFORD Boat Club’s adaptive squad was able to get back on the water at the weekend under the Department for Digital, Culture, Media and Sport and British Rowing’s Covid exemption for disability sport guidelines.

Welcoming the squad back on to the water was Stratford Mayor Cllr Tony Jackson and Mayoress Mandy Jackson, together with Stratford Boat Club president Paul Stanton.

Mark Dewdney, Stratford BC’s head adaptive coach, said: “This weekend was very special for the adaptive squad as, under the Covid exemption for disability sport, some of the adaptive athletes were able to get back to sport and recreation on the water.

“It took a lot of planning and risk assessments incorporating all the British Rowing Covid advice on sanitising and social distancing but it was certainly worth it.

“We’re hoping to get more adaptive athletes on to the water in the coming weeks and eventually the junior and adult members of the club.” 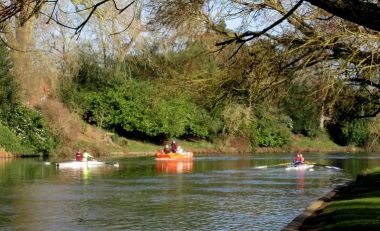 Paul Stanton, the club’s president, said: “Having the Mayor of Stratford coming down to cheer the adaptive squad back on to the water was a great honour and boost for the squad’s morale.

“Cllr Jackson has three main chosen causes during his tenure as Mayor which are volunteers, people with disabilities and health and well-being.

“Tony has been a great supporter of the club and especially the adaptive squad and he understands the importance of sport and recreation for the well-being and health of the adaptive athletes.”