The 20-year-old has been a recipient of SportsAid support for a large part of his short career and the charity launched a three-year partnership with GVC in 2019 – aiming to help young athletes across the UK realise their potential.

Treacy, from Henley-in-Arden, is currently enjoying the transition into the senior international ranks and was robbed of the opportunity to compete at his first senior World Championships earlier this year due to the ongoing pandemic.

Having seen older brother Farrell represent Team GB at Pyeongchang 2018, Niall is determined to follow in his sibling’s footsteps and believes crucial financial backing could open doors for him in a sport which sits largely away from the limelight in the UK. 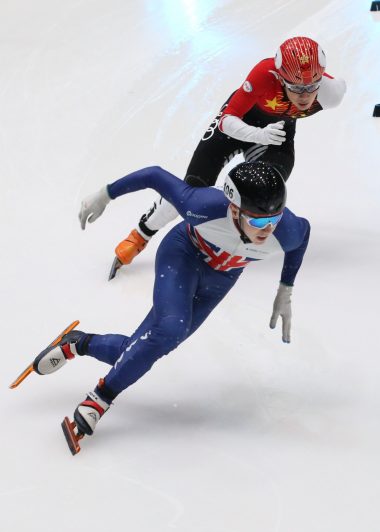 “The financial help provided by this partnership is massive for me as a speed skater, because the sport lost its UK Sport funding after the last Olympics,” said Treacy – one of 50 beneficiaries of GVC’s programme which is part of the Pitching In initiative.

“Those extra races and experiences all add up and ultimately it could be the difference between what I can achieve in the sport. To not receive the financial support would make realising my ambitions so much harder.

“I’ve had the chance to go and meet other athletes of a similar age in all different sports. Discussing training and learning different things from them was really valuable to hear in terms of what they were doing differently to you.

“I remember being shown Jessica Ennis-Hill’s application for SportsAid funding years ago, so to say you’re in the same group as people like her is amazing.”

As well as funding for training, travel and equipment, athletes on the SportsAid programme receive valuable mentoring by Olympians and Paralympians on topics such as nutrition and sports psychology.

The young athletes will be following in the footsteps of legendary figures such as Dame Jessica Ennis-Hill, Sir Mo Farah, Dame Sarah Storey and Ellie Simmonds OBE – all of whom received SportsAid support – and more recent beneficiaries including Dina Asher-Smith and Adam Peaty MBE.

Nadhim Zahawi, MP for Stratford, said: “It’s fantastic news that Niall is receiving support from Pitching In with GVC and SportsAid in recognition of his achievements in short track speed skating.

“At this incredibly difficult time and with so much uncertainty about the future, supporting young people and nurturing talent is of vital importance.

“The investment into British sport exemplified by this financial support for Niall is therefore extremely welcome – not least for the Henley-in-Arden and Warwickshire community who will be cheering Niall on in the months and years ahead.”

GVC is proud to be championing the next generation of British sporting heroes by providing talented young athletes with financial support and personal development opportunities in partnership with SportsAid.

As part of this three-year partnership, GVC is supporting a diverse group of 50 UK athletes per year from a variety of sports and para-sports. Visit gvc-plc.com to find out more.