RICH Shephard surprised himself by breaking Stratford Athletics Club record for the quickest time in a marathon.

Shephard beat the seven-year club record held by Chris Bacon by four minutes in Sunday’s Virgin London Marathon. His time of 2hrs 38mins 45secs placed him inside the top one per cent of finishers.

“I must say that I do feel like a bit of a fraud, as there’s no way that I deserve to be running a time like that this year,” he said.

“I knew I’d started a bit keen and kept thinking I must slow down a bit and I didn’t. Then at halfway I started expecting it to catch up with me at any minute…. Fortunately this wasn’t until around 24 miles.”

Just as impressive in its way was Kate Sergent’s time of 4:46.14 – four minutes quicker than when she ran London in 2011. Kate finished 63rd in her age category despite being at the top end of that category. Her time qualifies her for a good for age place next year.

Drew Sambridge just failed to dip under three hours but his time of 3:02.53 was still a five-minute PB.

Adam Linforth said he managed to haul himself around in 3:25.26 and that he was pleased with that for his first marathon, Nick Campbell (3:30.07) admitted to feeling a little emotional at the end, which took him by surprise but he thought it was a brilliant experience.

Emily Orton reaped the benefit of her hard training by recording a time of 3:42.42. Just a minute behind Emily, from the splits it looks as though John Raby completed the course in 3:43.43. 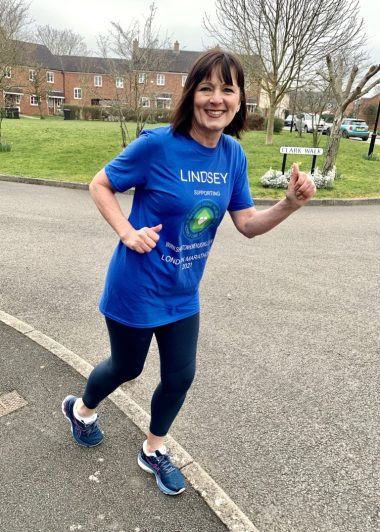 Lisa Lambourn (5:15.11) and Lindsey Anderson (5:27.52) managed to raise a whopping £9,000 between them for Meningitus Research and The Shipston Nursing Home respectively.

Lisa said she wanted to help The Meningitus Research Foundation achieve their goal of defeating meningitis and septicaemia. Her family has been personally affected and globally 5 million people are affected by meningitis every year.

Lindsey started running at the beginning of 2020 by joining some friends who were training for the 2020 London Marathon, completing a half marathon in early March 2020. Meeting up for runs was a bit on and off over the last year due to Covid, but she managed to keep running and decided to go for a charity place.

Shipston Home Nursing care for people with illnesses that do not respond to curative treatment. Their nursing service operates 24 hours a day, 365 days a year and their care is free of charge to patients and families. They operate through a team of fantastic Registered General Nurses (RGNs) and Health Care Assistants (HCAs) who always go the extra mile.