Puritans bring Town crashing back down to earth 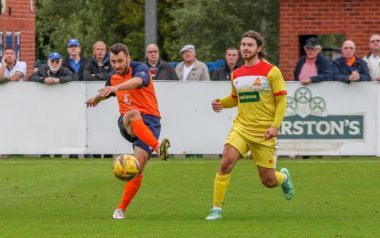 A SETBACK on Bank Holiday Monday in front of the Arden Garages Stadium faithful saw Stratford Town surrender their run of three successive victories in a narrow defeat to Banbury United.

The 1-0 scoreline in favour of the Puritans came as a result of Jack Westbrook’s headed finish on the hour mark – erasing the feel-good factor that was lingering from the 4-0 drubbing of St Ives Town on away soil just two days earlier – as Stratford were made to take stock of their promotion credentials against a fellow rival.

Nevertheless, it has still been an impressive start made by Paul Davis’ men to the Southern League Premier Central season, with a trip to Step Four side Carlton Town in the first qualifying round of the FA Cup on Saturday serving as another test, but equally a welcome distraction, from the fast-paced start to the season.

A crowd of 711 were gathered to witness the Bards attempt to maintain their 100 percent record on home soil this term, something which could have remained intact at the final whistle had Ashley Sammons’ seventh-minute rocket found the inside of the post as opposed to the upright.

Stratford’s lack of clinical finishing meant there was to be no breakthrough at the interval, despite Will Dawes and Jaanai Gordon both being presented with clear-cut chances.

Equally, Town’s Liam O’Brien had to be alert in the hosts’ goal and made two firm saves to deny Ben Acquaye in quick succession. 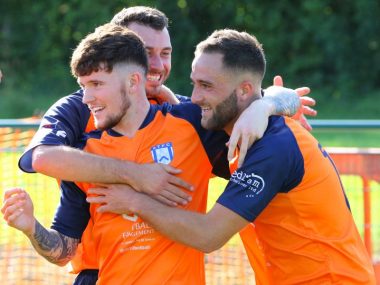 Will Grocott, right, is mobbed by his teammates after netting in Saturday’s victory. Pictures by Steve Wood and Paul Grant.

But O’Brien would be beaten when Giorgio Rasulo’s whipped free kick found the head of Westbrook at the near post, who managed to flick the ball into the net to evade the Stratford goalkeeper.

Henry Landers almost doubled Banbury’s lead but for the Town shot-stopper to pull off heroics in a one-on-one situation, a save which encouraged the hosts to go all out to search for an equaliser.

Other than Ahmed Obeng’s drive that stung the legs of United custodian Jack Harding however, Stratford failed to stump up many efforts on target to truly threaten Banbury’s lead.

On Saturday, James Fry, Will Grocott, Enoch Andoh and Dawes were all on target in last weekend’s drubbing of a poor St Ives side, with a similar result being hoped for in the cup, as opposed to the disappointment of Banbury, next time out.