O’Reagan gets his chance to step up in style 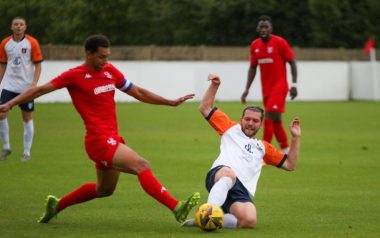 The defender, who has broken through in the past two games against non-League Step One and Two opposition – having also appeared in last weekend’s narrow 1-0 defeat to Yeovil Town, has provided another plus point for the Bards during his two assured performances.

And he says he could not be happier with how he has fared, given the quality of the opposition at hand.

“It’s been good, I started on Saturday against Yeovil at right back as Jordan [Williams] was injured, so that was my way in really,” said O’Reagan.

“But I enjoyed it, it took me ten or 15 minutes to get into the game, but after that I felt comfortable and quite confident.

“In the two years [at the academy] we trained full-time, which was my first experience of that, so that step up in intensity was really helpful and helped me with my game and for taking that step into men’s football too.”

Hosts Stratford led by a single goal at the break in their midweek outing, thanks to a ninth-minute Will Grocott drive which was buried past Harriers’ trialist goalkeeper. 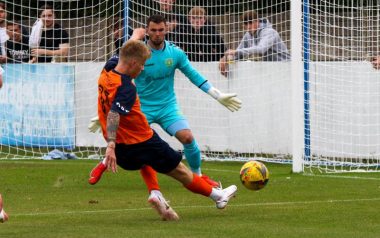 Will Dawes tries his luck in last weekend’s defeat against Yeovil Town. Pictures by Steve Wood and Paul Grant.

It took a diving header from Ashley Hemmings ten minutes into the second half for the National League North visitors to get back on level terms, inspiring substitute Sam Austin to crash home a go-ahead goal with less than 20 minutes to go.

But while Town were down, they were certainly not out, as Paul Davis’ side came roaring back to level the scores through Mitchell Glover’s penalty.

Then, five minutes later, the Stratford midfielder found himself involved in the action once again, putting through fellow substitute Bailey Fuller to snatch a late winner five minutes from time.

Last weekend, it required a second-half Tom Knowles goal to break Stratford’s resistance, in a show of fine defending from the Bards against opposition from two levels above.

THE PRE-SEASON spoils were shared between Rugby Town and FC Stratford on Tuesday night, after Ethan Champkins’ early second-half brace secured a 2-2 draw for the visitors at Butlin Road.

Carl Adams’ side looked good value at the break with a 2-0 lead, having gone in front through Danico Johnson’s instinctive double.

But with substitute Champkins tapping in early in the second half, the Stratford man was on hand moments later to glance home a right-flank centre with his head to deny Valley.

Off the field, manager Danny Janes has wasted little time in shaping his squad, tying down a number of his existing players while adding some new faces to the Arden Garages Stadium outfit.

“I feel the style of play will suit me really well and it’s a squad I’ve got high hopes for,” said the new signing.

“I cannot wait to get started now and test ourselves in this new league.”