STRATFORD Boat Club youngsters rose to the challenge to enjoy success at the British Junior National Championships at Holme Pierrepoint in Nottingham.

One of the most prestigious events in the racing calendar Stratford’s junior squad, the three-day competition attracted clubs from across the country.

The first day featured the J15 crews, and Stratford’s J15 coxed quad of Kate Richardson, Maddie Hall, Harriet Noyes, Amalia Richardson and expertly coxed by Imo Hill produced a stunning performance over the two kilometres course to take first place in the B final in 8:00:9, eight seconds clear of Cantabrigian.

The J15 girls double of Grace Bearson and Ruby Brooker Collins dug deep to win their E final in dramatic fashion, getting through on the last stroke to beat Queen Elizabeth High by five hundreths of a second with a time of 9mins 0.82secs.

Charles Happel qualified for the D final in the single scull and finished second.

“Overall a very pleasing performance on the day by all our crews making parents and coaches extremely proud!” said J15 coach Sam Hill. 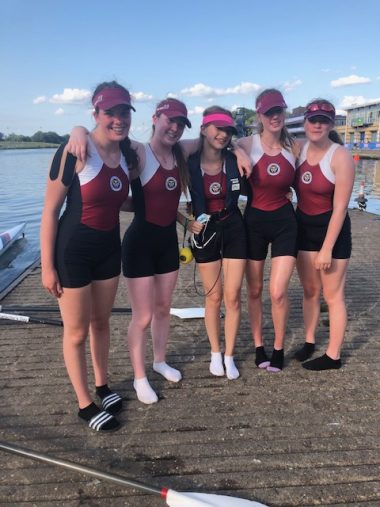 In the J16 open single sculls the following day, Tomi Wilcock took sixth in the C final and Toby Sartain reached the E final but his opposition pulled out.

Freya Watts and Fleur Griffiths, racing in the women’s pair for the first time, had a solid row to place sixth in the A final

Abi Terry, J16 coach, said: “It was great to see the crews able to race again and making A Finals was a fantastic way to end what has been a really challenging year for them all. Now to have fun in the summer events!”

In Sunday’s J18s events, the women’s double scull of Jasmine Moutney and Isabelle Watts, in her first national regatta, were a creditable 28th.

The WJ18 coxless quadruple sculls of Alice Baines, Amelie Sartain, Maiya James and Mili Wilcock battled with a quality Trafford Rowing Club in a thrilling C final, getting home in a photo finish to win by just 0.18 seconds.