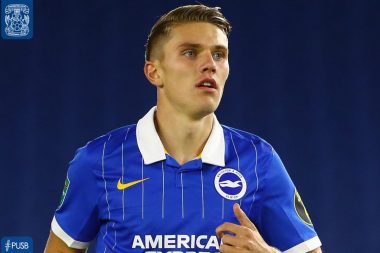 Viktor Gyökeres joins the Sky Blues until the end of the season. Picture: Coventry City FC.

The 22-year-old signed a deal until the end of the season with the Sky Blues, after his previous loan to fellow Championship outfit Swansea City was cut short last week, joining fellow Seagulls loanee Leo Skiri Østigård in heading to City this term.

Gyökeres had a frustrating spell at the Liberty Stadium, making 11 league appearances for the Swans but failing to find his net – albeit in only 274 minutes on the pitch – but did at least impress in domestic competitions.

The six-foot, two striker netted in Swansea’s recent 2-0 win at Stevenage in the FA Cup third round, having scored and assisted in an EFL Cup tie against Portsmouth earlier in the season.

With the hope of more regular minutes being afforded to him at St Andrew’s, his new manager gave a positive assessment of the Coventry new boy.

“He’ll provide a goalscoring threat in an important area of the squad for us.

“Viktor is a talented footballer with a great attitude too, and we look forward to working him between now and the end of the season.”

One positive omen that the Swede can draw upon is the form that he displayed during the 2019/20 season during his time at 2. Bundesliga club St. Pauli.

Pending approval by the EFL, the new boy’s first task as a Coventry player could be against Reading in Tuesday night’s trip to the Madejski Stadium, or in Saturday’s ‘away’ game versus Birmingham City.