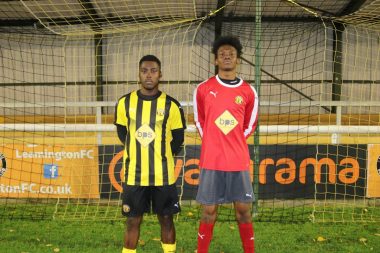 Rayan Pierre, left, and Thomas Kavuliviko, right, have both made the move across the Channel.

THE PROGRESSION of Leamington Football Club’s academy has been highlighted by the recent acquisition of two promising French talents.

Eighteen-year-olds Rayan Pierre and Thomas Kavuliviko have crossed the Channel in search of achieving their footballing dream, while working earning themselves a college education.

The academy, based at Moreton Morrell College, offers a route into the Brakes’ under-19’s side – a pathway that has proved successful with the French prodigies and six other local youngsters all making appearances.

Pierre, a Parisian, has led the line for Leamington’s under-19’s having established himself in the starting XI, while Normandy native Kavuliviko has appeared between the sticks – having done so at previous club Evreux Football Club 27.

Invited to the club for a trial by Mark Fogarty – Leamington’s football and business development manager, who struck up a contact with a football agent in France – it is hoped more players will be attracted to follow suit and join the academy from overseas.

The duo, in tandem with fellow college students Josh Allen, Dylan Parmar-Diggle, Fin Carter, Mackenzie Patchett-Smythe, Arthur Pomanus and Charlie Howlett have won their first four out of five matches in Division One of the MJPL Midweek Development League, sitting in second just three points behind Rugby Borough with a game in hand.

Speaking on the success of his side at this early stage of the campaign, under-19’s manager Scott Pheasey had plenty of praise for the new arrivals.

“The college players have come in and hit the ground running, it’s definitely more physically demanding on player condition but they have made the step up well,” he said.

“We’ve had a few college players in each week. It’s a good atmosphere in the squad and they enjoy being around the team.

“For the two French lads to come over to a country they don’t know is always going to difficult with the language barrier but they are adapting well.

“Thomas is a talented goalkeeper and Rayan is a forward with explosive pace, strength and likes a tackle too. He is comparable to how Jamie Vardy plays with his constant running and getting into the channels to cause defenders problems.”

To find out more about the course offered at Moreton Morrell College and for information on upcoming trials for Leamington’s academy, head to www.wcg.ac.uk/leamingtonfc

Motorsport UK confirms motorsport will restart in England from March 29

Wasps’ slow starts will be stamped out – Mansfield