The 18-year-old central defender will study sport, exercise and science while playing for the college team alongside students from around the world.

And although Olly will soon be 4,500 miles from home, he is looking forward to the challenge. 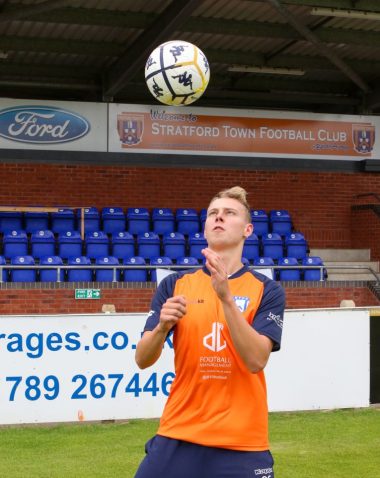 “It is a bit daunting but I’m looking forward to it and I know that I have the skills and maturity to be able to handle it,” he explained. “I will be the only British recruit this year. In my cohort there are Brazilian twins and players from Argentina, Scandinavia and loads more. It’s very exciting.”

Although his studies aren’t due to start until the end of August, pre-season starts on August 5 ahead of their first game on August 24.

Olly added: “I will be training every day but the season is a bit different over there, running from August to the end of November. Then you have a break before the spring season and then there’s the option to do a summer season.

“It all started here at Stratford Town. A company came in and did a presentation. I was convinced by it so I went home and spoke to my parents. I then got in contact with them and another company, discussing all the pros and cons.

“I chose a firm called YDPUSA. We did an interview and we spoke about my preferences before a showcase event at St Georges Park in December when we played in two matches which were live streamed to around 100 coaches.

“I had quite a few options, speaking to five or six colleges and had three or four offers. One was a junior college which I rejected and the others were in Illinois, Iowa and Oklahoma. I then had zoom calls with the managers and assistant managers and I asked to speak to players to get their perspective.

“At Oklahoma I spoke to a Geordie lad called John who was their captain and I pretty much speak to him every day now. He has given me loads of tips. The other co-captain is from Bristol and he has helped me as well.”

Stratford Town are holding a trial for prospective students on Monday, July 18, from 6 to 7.30pm and Olly believes the club’s academy is one of the best having passed his course with a distinction.

He said: “When I started here it was quite unusual because the only other full-time academies were the professional ones. I’ve really enjoyed my time at Stratford and the club has given me some great opportunities off the pitch as well – refereeing, coaching and even working behind the bar.

“More academies have popped up over the last two years but I have to say that this one is better than those that my friends have gone to and I’d certainly recommend it.”

To find out more about the academy trial, email academy@stratfordtownfc.co.uk