First-half goals enough for Bards to down Reds 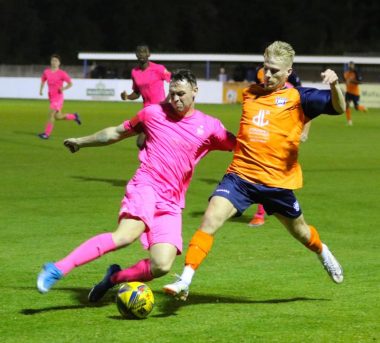 Goalscorer Will Dawes, right, puts in a challenge in Tuesday night’s victory. Pictures by Steve Wood and Paul Grant.

FIRST-HALF strikes from Ahmed Obeng and Will Dawes proved enough to give Stratford Town their first three-point haul this season in Tuesday night’s 2-1 victory over Redditch United.

Paul Davis’ men were able to hold off a Reds resurgence after the deficit was halved to ensure a maiden win in Southern League Premier Central for 2021/22, having gone down by a 3-1 scoreline at Coalville Town on the opening day of the season.

Obeng’s 22nd-minute opener came after the winger drifted inside from the left flank before letting fly with a precise effort that flew out of the reach of United ‘keeper Kieran Boucher, giving the Bards a deserved opener after early promise.

And six minutes before the break, continued pressure resulted in the lead being doubled – Dawes this time on hand to find the net after cutting into the penalty area from the byline. 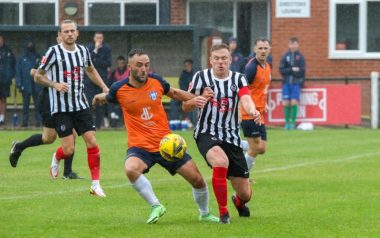 Will Grocott, left, holds up the ball despite the torrential conditions during their Coalville Town defeat. Pictures by Steve Wood and Paul Grant.

The hosts’ stronghold on the game came under threat however following veteran defender Asa Charlton’s header on the hour mark that left Liam O’Brien helpless.

While the Reds took great confidence from that goal, Matt Clarke’s men could not find the leveller despite a raft of late chances – including goalkeeper Kieran Boucher heading wide from a last-ditch corner.

Town will now look to build momentum at this early stage of the season, starting with Saturday’s home meeting with Royston Town at the Arden Garages Stadium.