Dabo and Sheaf set for spell on the sidelines, but Sky Blues boosted by returning duo 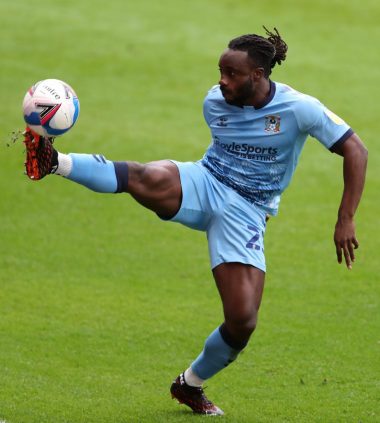 Fankaty Dabo is set for a spell on the sidelines. Picture: PA.

SKY BLUES manager Mark Robins has confirmed that he is set to be without Fankaty Dabo and Ben Sheaf for an extended period – but is buoyed by news of the imminent returns of Liam Kelly and Matty Godden.

Coventry City have enjoyed some downtime over the international break following a packed playing schedule since the festive period, giving Robins’ troops the respite needed to go into Good Friday’s fixture at Queens Park Rangers with plenty of optimism.

And while City will have to do battle at the Kiyan Prince Foundation Stadium without two valued first-team members, there is hope for Kelly and Godden to potentially play a part in another big fixture in the battle against the Championship drop.

Robins said: “Liam trained on Monday, it’s an interesting period because you want to get people fit and training, but when you push them there’s always that chance of them breaking down so it’s trying to find that balance.

“Matty is closer [after making a goalscoring impact against Wigan Athletic for the under-23s].

“The timing isn’t 100 percent there but his finish was a really good one, he can find himself in space and his movement is very good.

“Fankaty has got a hamstring tear that will probably keep him out for a month, so that’s as near as the end of the season.

“Ben picked up a hip problem. It looks like a tear to his hip flexor so that’ll be a period out for him.

“Other than that, we’ve just got some bumps and bruises [in the squad], so hopefully there won’t be too many more between now and when we resume the fixtures.”