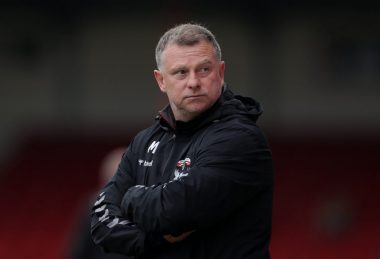 Mark Robins was full of the joys after City’s survival was secured. Picture: PA.

Despite slipping to a 1-0 defeat to Preston North End at St Andrew’s, Derby County’s defeat to Coventry’s landlords Birmingham City ensured that the Sky Blues will be playing in the second tier of English football upon their return to the city and the Ricoh Arena in the 2021/22 campaign.

For a reflective Robins, who has not only brought progression to the club, but also stability since joining the Sky Blues for a second spell in 2017, the current campaign will go down in history for a plethora of reasons.

“What we’ve achieved is nothing short of a miracle,” said the 51-year-old, in reference to a second year spent out of the city, and in a campaign with no supporters.

“This is the biggest achievement I’ve had in my managerial career.

“It’s been so tough, credit to all the players because they’ve put an unbelievable amount of effort in. The fact they’ve stood up in the last week or so and won three games is a testament to them.

“It’s so beyond winning League One last season, all the things we had to go through this season is unprecedented.

“They deserve all the plaudits and everything that comes their way, because over a four-year period this club has been absolutely magnificent.”

With no further midweek fixtures this term, City will head to Huddersfield Town on Saturday.