THE FINAL round of the 2020 Millers Oils Ginetta GT4 SuperCup brought delight for Century Motorsport who came away with more trophies to add to their already enviable collection.

The Fenny Compton team took a total of four podium finishes from two races at Brands Hatch – one of which was a whopping win.

The last qualifying session of the year was a wet one on Saturday morning. Burton and Jamie Falvey posted the third and fifth quickest times in the Pro Class respectively, whilst Salkeld posted the third quickest Pro-Am Class time.

Conditions were damp but drying for race one and Burton made a move on the first lap to take second place, but was unable to catch the leader and went on to cross the finish line in second.

Unfortunately, Falvey’s car had an alternator issue during the first lap, which caused him to retire from the race. Salkeld sat comfortably in third place in the Pro-Am class and went on to take third place at the finish.

The sun made an appearance on Sunday for the final SuperCup race of the 2020 season, which was broadcast live on ITV4.

Burton grabbed the lead from Adam Smalley off the start line and then went on to control the entire race with ease – posting the fastest lap of the race and crossing the finish line more than five seconds clear of Smalley. 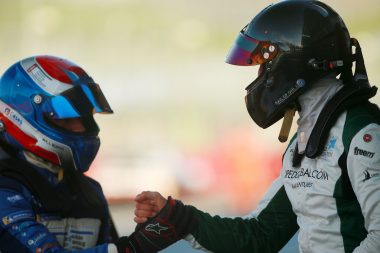 Falvey made a good start to the race and was on track for at least a fifth-placed finish after starting from the back of the Pro Class grid.

It certainly was not a weekend of good luck for him though as he had an off just five laps before the chequered flag and was forced to retire from the race after serious front-end damage.

Salkeld put in some great laps to take a second-placed trophy in the Pro-Am Class and finish eighth overall out of 15 race starters.

As for championship standings, Burton finished just 33 points behind the winner – taking the overall second-placed trophy.

A couple of DNFs earlier in the season made it difficult for Burton to compete for the title but the 17-year-old had an incredible SuperCup debut – taking 16 podiums out of 17 races he finished with five wins.

Falvey finished the season in fifth place in the championship standings. In the five rounds he competed in with Century Motorsport, he took six podiums out of ten races he finished with two wins.

Salkeld only joined the team for the final two rounds but during this time he took four out of a possible five podiums, which included one win. Salkeld finished in second place in the Pro-Am championship standings.

Century Motorsport are looking forward to next season and ask any prospective drivers to email nathan@century-motorsport.com or phone 01295 770115 to discuss racing opportunities for 2021.