ONE of the first ‘real’ events since March was the opening race of the 11th Tempo Winter Series which attracted a good Stratford Athletic Club turnout and was won by Matt Burdus-Cook.

Operating under a very different timetable and in time trial format, each little group of five or six runners were given a specific start time – only allowed to arrive 30 minutes before and having to leave within 30 minutes after finishing.

Organisers tried to match the groups according to requests, similar speeds and clubs – as far as possible – and runners came with smiles aplenty and made their own atmosphere in their mini socially-distanced groups.

First off were the fastest. The reigning series champion and wearing number one, Stratford’s Burdus-Cook (37.06) ran a fantastic race pretty much alone to clinch victory – eventually finishing almost three minutes ahead of second-placed runner Oliver Flippance from Kenilworth.

Three other Stratford runners in the same fastest group all ran very strongly.

Andy Cox took an impressive seventh place in 41.38 and in-form Jamie Chorley was eighth in 42.12. Adrian Mason was two minutes off his best time for the course in tenth (43.18) but has been coming back from injury and should be very pleased with that time.

Of the next group, Owen Goschen was rightly absolutely delighted with his run to take 11th in 43.27 – having struggled with injury last year – and David Smyth, slightly surprised by the performance of Goschen, said he probably should have hung on to him, but also pulled out a strong run to be 16th (44.26).

A good performance from James Coy put him just outside the top 20 in 45.12, whilst also starting in this group – the seemingly always happy Graham Hill – ran a great race for his second best time on this course of 47.45.

Joe Lee felt inspired to come back to his best for future races after his long distance triathlon focus and he clocked 48.03.

First back for the Stratford ladies was Fern Hordern (50.08), who was fifth lady and FV45 winner. 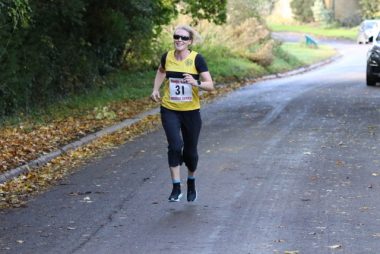 The ladies’ race was won by Caroline Warrington from Bromsgrove & Redditch AC in a very quick 42.13.

Another four-strong SAC group went out together and enjoyed some banter and club camaraderie, eventually pulled home by Louise Stewart in a great time of 56.42 (11th female), followed by Rebecca Pridham (57.31 and 12th lady).

The boys dropped off a bit in the village section as Simon Curran (57.47) just beat an injured Tony Tomacek (57.51) who was not sure he would get to the start, let alone finish.

Richard Hartwell should have been pleased with his 59.14, not too far off his PB for the course, and a very happy Lara Bakewell was back in 63.10, as ever juggling small children with fellow club runner and husband Ryan.

She was closely followed by Christian Williams in 63.15.

Paul Nash loved the time trial format, as did quite a few runners, and finished in 70.22.

Bringing up the rear for Stratford (but not the race) was John Butler 84.16 who also took the M75 age group title.