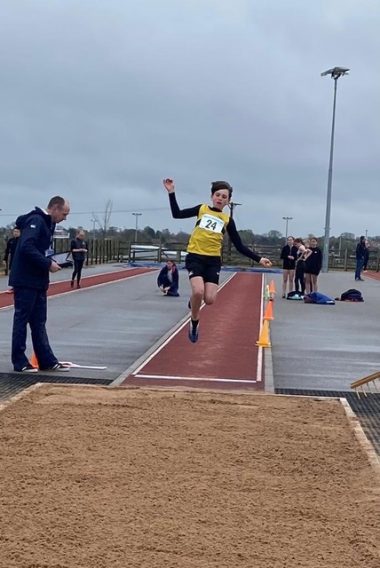 OVER 20 members of Stratford-upon-Avon Athletic Club took to the John Love Memorial Open last weekend, setting a string of personal best times in the process.

It was yet another successful turn out for the club’s athletes since events recently restarted, with proceedings at Moulton College’s athletics track in Northampton no different.

One name to stand out in particular was 15-year-old Alex Adams, competing in the under-17 category for the 5000m race – his debut at that distance.

Unfazed by the greater demand expected of him, Adams went above and beyond to finish in 16 minutes, 22 seconds and one millisecond, a time that set a new club record for his age group and even beat Stratford’s previous best in the U20 category.

As a result, he now ranks 15th in the UK rankings for an under-20 runner at 5000m, and has the existing 15:58 overall club record time well within his sights.

Olivia Robinson and Josh Harrison stood out in the 1500m races, recording times of 5:17 and 6:02.9 minutes respectively, the latter making his debut in this event.

At a shorter distance, Stratford were well represented in the 800m event, with no less than seven members taking part.

Niamh Hillard smashed her previous best with a two minute and 30 seconds finish, with Abbi Cooper also joining her in recording a new landmark when crossing the line 17 seconds after her teammate.

Silvers, incidentally, found greater success in the 200m race which preceded, coming first when clocking 30.2 seconds for a new PB.

She was joined by Reynolds – who was first over the line in 26.3 seconds in her heat – and under-20 runner Harry Gravelsons – who came second and scooped a new best time of 24.1 seconds in the men’s category – in taking on the distance. 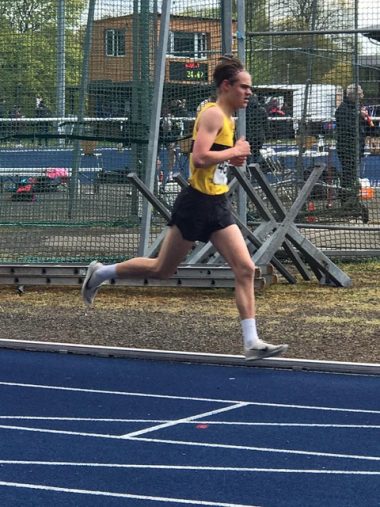 Alex Adams, meanwhile, made an impressive debut in the 5000m race. Pictures by David Jones.

Over 300 metres, Reynolds once again came out on top in 42.8 seconds, being joined by teammate Fox-Rowe shortly after in 46.2 seconds.

Those achievements perhaps spurred on Seb Hillard in the under-15 category, who recorded personal bests in the 100m race (13.4 seconds) and long jump (4.69m).

There was a sibling rivalry ongoing between Fernandez brothers Benjamin and Ruben, participating in the under-11 and under-13 categories respectively.

Stratford were head and shoulders above the rest in the older age groups, taking all three podium places in the U17 and over event.

Winner Acelin Smith led the way with a 47.97m throw, while Josh Roberts’ 45.57m and Holly Newton’s 30.42m attempts were enough to fend off their competition.

In the U13/U15 javelin group, Nikola Wodzisz narrowly edged teammate Alex McMillan with a 26.17m effort, the latter managing 25.29m in his first attempt as an U15 thrower.

Elsewhere, Caitlin Boyle was the club’s only high jump participant, managing 1.30m, whilst Charlie Whorrod flew over the line in the U17 100m race in just 11.8 seconds.