A coffee-loving couple have transformed a disused telephone box in Stratford town centre into a mini-café serving fresh coffee. 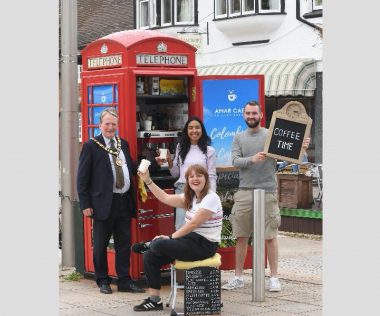 Lore Mejia and her husband Sean Rafferty, owners of Amar Café, have converted the box on Waterside by the end of Sheep Street into one of the UK’s tiniest cafes.

The iconic red box will be manned by a single barista, who will serve a variety of classic coffee styles such as espresso, americano and cappuccino, all made from high-quality beans from Colombia.

The couple met in Lore’s native Colombia while Sean was travelling there, and their love of the country’s coffee inspired them to bring it over to the UK.

Lore decided to open a phone box café in Stratford, their third overall and the only one outside of London, because of how much she loves the town.

She said: “I had visited Stratford many times before, and I thought it would be a great place to open a new phone box café.

“It’s a beautiful town with a lot of history, and one day I’d probably like to live here. The people in Stratford are so polite and friendly too, just like in Colombia.”

Lore initially decided to start the business with Sean through her previous role as a journalist in her home country.

She had been reporting on farmers who had regained their livelihoods through cultivating coffee after being displaced by conflicts involving Colombian paramilitary groups.

Lore said: “After talking with those farmers, I saw that coffee was something that could really transform people’s lives.

“Because Sean and I love the coffee there and wanted to support these incredible farmers, we wanted to bring it to the UK. That was when we decide to found Amar Café.

“We wanted to open up a shop or a market stall originally – but everyone else was already doing that.

“We really wanted to stand out from the crowd, and we saw there were quite a few classic red telephone boxes in London that weren’t being used for anything. We felt it was a great opportunity.

“Even though phone boxes are a really small space, we can still serve great Colombian coffee to people.

They’ve worked well so far – the telephone box catches our customers’ eyes at first, but it’s the quality of the coffee that keeps them coming back.

“We know some fantastic farmers in Colombia, so we only serve the best.”

Lore is hopeful Stratford’s telephone box café will be a success for Amar Café, despite the complications created by the pandemic.

To support the town even further, Lore has also said the baristas manning the café will be from Stratford and the surrounding area. The first, Charlotte Bowers, has already been hired, but Lore is hopeful she can find two more.

“It’s not going to be easy, but I’m hopeful Stratford will embrace our little café in the coming months,” she added.

“If all goes well, we’d like to open some more telephone boxes around the country, and even start supplying restaurants and cafés ourselves.”

Chairman of Stratford-on-Avon District Council, Cllr Christopher Kettle, said: “This is a fantastic idea by Lore and Sean to convert one of our old telephone boxes into something useful. I’m so pleased they chose to open their first phone box outside of London in our town, and I’m confident residents and visitors will support the cafe in the coming months.

“I have to say the coffee was excellent, and I’d be more than happy to go back for another. The cafe is a wonderful addition to Stratford, and we wish them all the best for the future.”