PEOPLE were throwing money into buckets while waiting at traffic lights on Sunday afternoon as dozens of bikers turned out to grant a terminally ill lady’s wish.

Norma Bowers was told by doctors she has just months left to live after she was diagnosed with Multiple Myeloma in 2012.

After receiving the heartbreaking news, Norma made it clear she wanted a special send off and requested a group of bikers to escort her coffin when the time comes.

However members of Shakespeare Bikers, Coventry Bike Meets and Buds with Bikes had other ideas, and wanted to make Norma’s visions to become a reality before her very own eyes.

It was decided a special charity ride from The Millpool pub in Coventry to The Tramway in Stratford-Upon-Avon would take place to raise vital funds for Myeloma Trust – a charity which has supported Norma throughout her battle with the disease.

Organised by Carole Davis, Joe Langley, Pat McCullagh and Irene Bartholomew, the event raised more than £2,500 for the charity as generous members of the public took time out to donate and honour Norma during her final ride.

Wrapped up in plenty of layers, the Coventry resident braved the cold and led the parade as bikers made their way down the Fosse Way.

Carole Davis, one of the event organisers praised the efforts of everyone who turned out and said the ride wouldn’t have been possible without the many volunteers involved.

She added: “The day was a great success and despite the weather we had a fantastic turnout of riders who all supported Norma.

“People at The Millpool and Tramway were incredibly generous and we had people actually wind the windows of their car down so they could hand fundraisers change while they waited for the traffic lights to change.

“We smashed the £1,000 fundraising mark before a wheel had been turned, and now to have totalled more than £2,500 is wonderful.

“Norma braved the cold too and she must’ve been incredibly cold but she enjoyed the day so much, it was lovely to see.”

Visit www.justgiving.com/fundraising/normasride to make a donation or normasride@hotmail.com to find out further information. 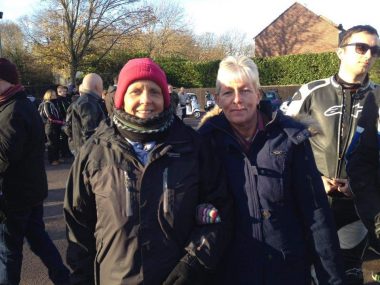