Who will win Wimbledon titles? - 2021 preview - The Stratford Observer

Who will win Wimbledon titles? - 2021 preview 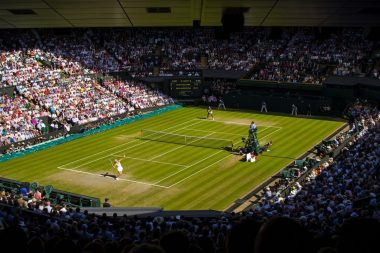 By Malcolm Graham CEO of Aceify.

Wimbledon 2021 is about to start and so it is prediction time. Who will win this year?

On the men’s side, the other three grand slams have recently been dominated by the ‘big 3’ of Novak Djokovic, Rafael Nadal and Roger Federer.

Djokovic holds ‘The Aussie Open’ and the last Wimbledon (2019). Rafa Nadal has totally dominated The French Open over the last 15 years. The last US Open was won by Dominic Thiem after the high profile disqualification of Novak Djokovic.  Novak Djokovic is the hot favourite for Wimbledon 2021 with the bookmakers. Other leading contenders are Danil Medvedev and eight time champion Roger Federer.

Wimbledon 2021 could well be Federer’s last realistic chance of winning a Grand Slam. He is 39 years old and now off the pace on hard courts and clay. With his game perfectly suited to the grass courts and the fact that grass court tennis is slightly less physical than other surfaces he is definitely a serious contender at Wimbledon 2021.

Russian Daniil Medvedev has had a pretty good run in the French Open reaching the 1/4 finals. Medvedev is not a fan of the clay courts in Paris and before 2021 had never won a match at the event. Rafa Nadal cannot be ignored but tends to struggle on grass in recent times. It would be a shock if Nadal lifts the trophy.

Britain’s’ own Andy Murray will hopefully play and also has won Wimbledon twice (2013, 2016). Murray is an absolute warrior and had hip resurfacing surgery, which involves inserting a metal rod into the femur and coating the joint in metal. He says the operation is primarily to end the pain but that he will see if he can play professionally again. It is amazing to see him on court after what he has been through and we wish him well.

Other players that could challenge the big three are Thiem, Zverev and Tsitsipas. Thiem has had a very disappointing 2021, going out very early at the French Open. However, he is the defending US Open Champion and certainly one to watch.

Former Grand Slam champions Juan Martín del Potro, Stan Wawrinka and Marin Čilić are also dangerous. All of the three have major injury concerns. If fully fit they are capable of going all the way.

Two Italian young guns are breaking into the top of the men’s game: Jannik Sinner and Lorenzo Musetti. These are two of the hottest prospects in tennis. They are polar opposites with Sinner being a solid, consistent counterpuncher. Musetti is a flair player with undoubted talent. However his fitness and mental toughness are questionable at present.

On the ladies side, the tournament is a bit of a lottery with no clear favourite. The bookmakers are making Serena Williams and Ash Barty the favourites.

Williams has won 23 Grand Slams and she is a strong contender for sure. Williams is determined to win another Grand Slam so that she levels and then potentially exceeds the 24 grand slams of Margaret Court.

Ash Barty is the world’s number 1 player and certainly a strong contender. Iga Swiatek and Naomi Osaka are strong contenders. Osaka pulled out of the French Open after refusing to participate in press conferences. She currently holds the US Open and the Australian Open. At the moment we are not sure if she will play Wimbledon. The tennis world is hoping to see her in SW19.

Other top contenders include Karolína Plíšková, Petra Kvitová and Garbiñe Muguruza. Any of these three could win. Unlike the men’s side, these relative ‘outsiders’ could win the event. The chances are that the winner of the ladies is someone unexpected which makes the event very interesting.

Definitely worth a mention is Cori ‘Coco’ Gauff who is still only 17. She, however, likes the grass of Wimbledon and is having a very good season. 2020 was disappointing for Coco who was having struggles with her serve and volleys. These issues seem to have now gone away and she is more than likely a future Grand Slam winner. She could win Wimbledon 2021.

For the ladies event, the draw will be important with the very real possibility of some of the big names above getting a tough draw and watch out for big names going out early.