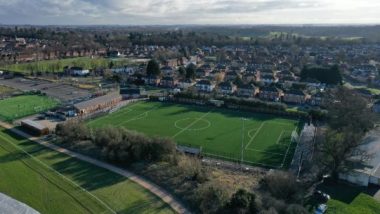 CHAIRMAN Gary Vella is hopeful for the future of football in the Warwickshire county – and views the new development at Racing Club Warwick’s Townsend Meadow as a key stepping stone to blooding the next generation of talent in the local area.

The Midland League Premier Division side have been anything but quiet ever since the coronavirus outbreak 12 months ago, atoning for the lack of action on the pitch with plenty of work behind the scenes to bolster the club in both the short and long-term.

Works on a new 3G playing surface and clubhouse refurbishments have been taking place ever since planning permission was granted by Warwick District Council last July, with the new-look facilities at Townsend Meadow now complete and ready for use.

Given the investment in the club, it is no surprise that the Racers are keen to stretch their influence as far as possible, adding a new under-23 development squad, an under-16 academy structure and several girls teams for the 2021/22 season – with a view to fielding a women’s first team and branching out into disability football in the future also.

Vella is understandably excited for what lies in store for local talent, and said: “With the new facilities and the pathways already implemented, and alongside our partnerships with Coventry City, Future Pro and Scott Smith Coaching, we can offer opportunities for all levels.

“It is important to ensure that it is local Warwick District children that get these opportunities over those from further afield, who are already well serviced by existing infrastructure and services.

“For far too long this area has been deprived of real development opportunity and we will ensure that it is local talent that get the benefits, over and above any short-term gains to the club which could be made by looking further afield.”

The club have already proven successful with their scholarship scheme for under-19 players and their under-18 Midland Floodlit League side, and look set to continue going from strength to strength once their new facility is allowed for public use from March 29.