WHILST most Stratford Boat Club rowers were happy to be back on the water after four weeks of lockdown, competition racing got back under way for one J16 athlete.

The 2020 British Rowing Indoor Championships took place virtually over the weekend – held online with competitors joining from all over the world by connecting their rowing machines together via the internet.

Tomi Wilcock from Stratford Boat Club’s J16 squad represented the club in the year 11 boys’ six-minute race, joining 40 competitors online from all over the UK as well as countries including Australia, Denmark and Portugal. 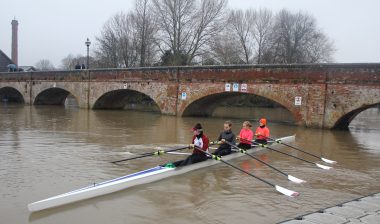 Stratford’s athletes are delighted to be back on the water after four weeks.

Off to a measured and steady start, Wilcock gradually worked his way up the field to reach 20th at the halfway mark.

Maintaining this steady approach, he held off many challenges in the latter stages of the race to finish a creditable 22nd with a distance of exactly 1,700m rowed in six minutes.

Abi Terry, Stratford’s J16 coach, said: “Tomi set out with a race plan and stuck to it – achieving a fantastic score on the ergo despite the difficult conditions and being on his own instead of in front of a crowd cheering him on.

“It’s great to get some racing back under way, even if for now it has to be virtually!”