After a poor start to the Southern Premier Central season, the Pitmen had parted company with Andy Morrell the previous midweek and replaced him with Keenen Meakin-Richards, who enjoyed a dream start as manager.

The opening half hour was a scrappy affair and in keeping with the hosts’ opening goal which arrived in the 31st minute when Ken Feyi was dispossessed near the halfway line and Dan Sweeney centred from the right for Dan Turner to convert from close range.

Two minutes later another cross was converted by the head of Louis Dodds before Stratford conceded a third moments later when Sweeney thundered home an emphatic shot with the visiting defence all at sea.

Town, badly lacking the creativity of the talismanic Ash Sammons who was absent, were vastly improved in the second half and found a way back into the game just before the hour mark when the industrious Callum Powell tricked his way in from the left wing and squeezed home a near-post strike.

Both Andoh and Powell were denied by smart saves as time ticked by but there was still a glimmer of hope for Davis’ side when Andoh headed home from Greg Kaziboni’s cross in the first of four additional minutes. 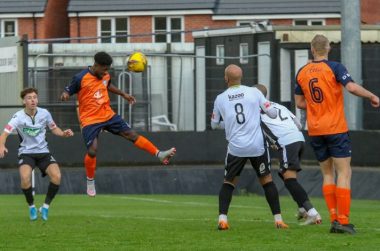 Stratford threw everybody forward in search of a last-gasp leveller as keeper Ty Belford went up for a corner but the home side cleared the danger and, after lone defender Mitchell Glover was robbed of possession, Turner was able to walk the ball into the empty net.

Stratford, with nine points from five games, will aim to bounce back at home to Hitchin Town on Saturday.