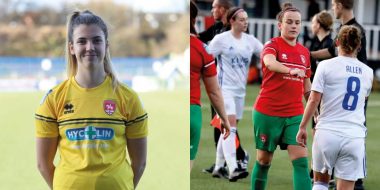 MANAGER Jay Bradford says Coventry United Ladies are looking to the future after tying down the futures of Olivia Clark and Anna Wilcox to the club.

The Red and Greens, currently ninth in the FA Women’s Championship, have strengthened ahead of their league restart with Charlton Athletic on January 24, making a statement of intent by keeping the duo at Butts Park Arena.

Welsh international Clark, 19, will remain at the club until 2023 in a deal that is very much casting an eye to the future, having made her first two appearances for United in the defeats to Aston Villa and Leicester City in November.

Meanwhile, 26-year-old defender Wilcox signs professional terms for the first time after impressing in her 11 appearances to date since rejoining from West Bromwich Albion – scoring a late equaliser last time out in the 1-1 draw with London Bees before Christmas.

Bradford was keen to express her joy, and said: “Olivia is a really young exciting prospect and has a huge future at this club.

“Signing Liv on a two-year contract is a significant deal and just shows the belief we have in her.

“Anna is a superb centre half who I thoroughly enjoy working with, so I am glad that we have made this a permanent move.

“I’m looking forward to working with both players and continuing our good work together in the second half of the season and beyond as we look to climb the table.”