STRATFORD Town will look to get rid of their FA Cup hangover when they welcome Rushall Olympic to the Arden Garages Stadium on Saturday.

The Bards were swept aside 4-0 in Tuesday night’s trip to Barwell to follow a 2-1 defeat at Alvechurch on Saturday.

Despite their record-breaking Cup endeavours, it means Paul Davis’ side have won only once in the last eight games in the Southern Premier Central and they will need to refresh weary minds and bodies for the visit by fourth-placed Rushall and then Tuesday’s trip to sixth-placed Tamworth.

The Bards have bolstered the squad by welcoming back striker Mike Taylor and signing ex-Tranmere, Portsmouth and Burton Albion forward Adam McGurk, but fellow forward Jaanai Gordon has moved to Hereford.

On Tuesday, it was a tale of defensive errors being ruthlessly punished. 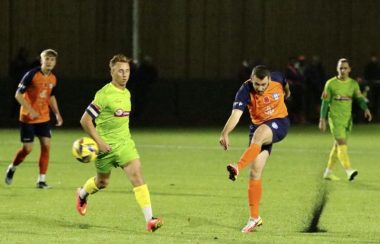 Former Stratford favourite Ben Stephens gave Barwell the lead five minutes before half-time after two Stratford defenders jumped for the same ball, and Brady Hickey made it 2-0 from the penalty spot on the hour mark.

Will Warren ( 69mins) and Tristan Dunkley (83mins) sealed the points after poor marking from set-pieces.

Last weekend, another ex-Stratford player Claudio Dias netted against his old pals to give Alvechurch the lead.

He converted Sam McLintock’s cross eight minutes into the second half but Enoch Andoh levelled on 80 minutes after firing past keeper Dan Jezeph. However, within two minutes, Church bagged the winner after Tom Turton smashed a penalty past keeper Liam O’Brien following a foul by Kynan Isaac on Josh Ezewele.