STRATFORD-upon-Avon AC produced a stunning team effort to finish third out of 15 teams in the prestigious ‘A’ Cup Final in the Midland Vets Track and Field Cup at The Pingles Stadium in Nuneaton.

Stratford finished ahead of much bigger clubs such as Birchfield Harriers and Royal Sutton Coldfield and edging out local rivals Leamington by just 9.5 points – 308.5 v 299.

This top three finish was achieved despite team selection being hampered due to a fixture clash with the Stratford Big 10k.

For anyone who doesn’t know, you are considered a vet in athletics at the tender age of 35. 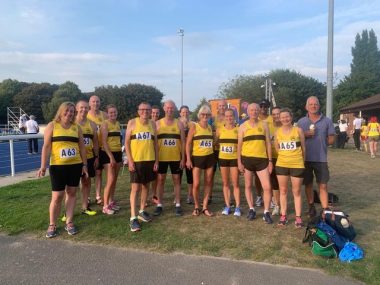 The Stratford Vets squad at Nuneaton.

In these type of championships it is not only the winners on the day who help you to achieve success, it is those finishing in the lower positions who, by picking up valuable points, contribute greatly to any success you may have as a team and the club managed to fill 31 of the 36 events taking place.

This meant many team members competing in events outside of their comfort zone. A look at the individual results shows just how much of a team effort it was. However, there were many exceptional individual performances.

Stratford’s golden trio of Paula Williams, Elaine Ledden and Dave Wilson were responsible for all 10 of their outright victories and contributed 30 per cent of the points total. 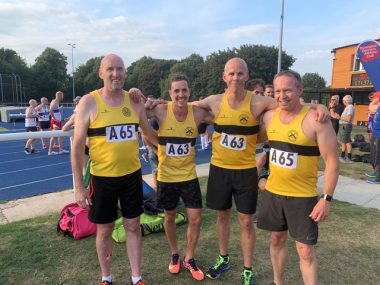 Dave Battersby has been suffering from a sore achilles for sometime and the meeting also clashed with his daughter’s birthday. Despite this he agreed to make the journey to Nuneaton just to compete in M40 100m (13.56). It seemed a long way to come for a 13-second race, so when he discovered the club didn’t have a competitor in the M40 3,000m he volunteered, running it in a time of 11:24.04.

Peter Sugden answered the call to compete in the technically challenging pole vault but unfortunately twisted his ankle in the process. He still managed a clearance of 1.80 metres.

Emma Bexson and Hannah Osborne are old hands at T&F, always ready to answer the call, always prepared to try something new and always competitive on the day.

Racewalkers Gemma Smith and Kate Sergent both finished fourth in their respective W35 and W50 races. Gemma clocked a time of 15:13.48 and Kate in 15:03.63, contributing an invaluable 10 points to the club’s total.

If anyone epitomised the spirit in the team it was septuagenarian Cindy Brittan. Giving up her place in the Stratford Big 10k, she embarked on coaching lessons for her W70 long jump, finishing third with a jump of 1.53 metres. She also finished fourth in the shot put with a throw of 3.67 and finally she came fourth in W70 100m in a time of 27.70, contributing 16 points in all.

Several of the club’s Senior T&F club records were broken on the day:

The team were unanimous in thanking their officials on the day –  Sandy Green, Tony Jackson and Emma Sparrow and Andy List.