A BLISTERING first half performance from Stratford Town proved enough to secure a 2-1 victory over local rivals Redditch United and lift the Warwickshire side into third place in Southern Premier Central.

Matt Clarke’s United produced a vastly improved second half display in Tuesday’s encounter as they made Town sweat, but the damage was done and the visitors’ second defeat of the league season saw them slip to sixth.

Stratford, fresh from Saturday’s superb 3-2 victory at Lowestoft Town, were immediately on the attack through the influential Will Grocott who thrived as former Redditch midfielder Ash Sammons bossed proceedings in midfield.

Stratford opened the scoring through Callum Powell’s far post header before Sammons doubled the advantage with a stinging 20-yard drive.

Tom Hillman’s fierce 39th-minute strike which forced a good save was all Redditch could muster in reply but the second half was much tighter as the visitors kept a tighter rein on Sammons. 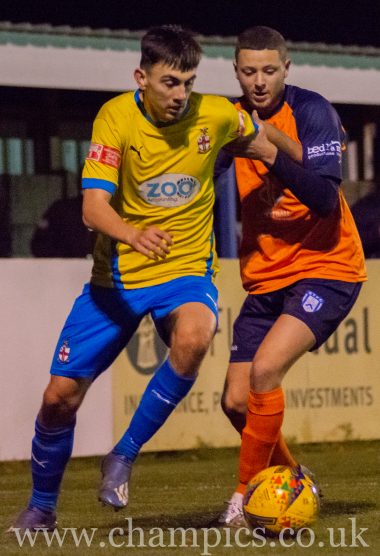 Some slack defending allowed Kyle Copp to steer home a 20-yard effort to reduce Redditch’s arrears midway through the second period but, despite a few anxious moments for the hosts, United never truly threatened an equaliser.

The closest either side came to a goal in the closing stages was when Kynan Isaac was fouled on the left and Grocott’s quick free kick played substitute Enoch Andoh in but, from a tight angle, his shot deflected off keeper Kieran Boucher on to the near post and away to safety.

Both sides are in FA Trophy third qualifying round action on Saturday when Stratford entertain Kidsgrove Athletic and Redditch host Nantwich Town.