IT WAS a Sunday to savour for Stratford Boat Club which learnt one of its impressive adaptive scullers had won the Shakespeare Lions Young Ambassador Award.

The accolade was presented to Jake Blatcher, who sculls regularly and volunteers with the adaptive section at Stratford, by Peter Humberstone, the immediate past president of Shakespeare Lions.

Jake donated this prize to the adaptive section of the club and the monies will be used for an adaptive grip, yoga mats and other equipment. 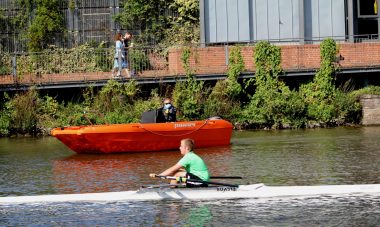 Jake Blatcher in action on the water in the club’s new adaptive with Mark Dewdney, head adaptive coach.

Mark Dewdney, head adaptive coach, commented: “We are immensely proud of Jake’s achievements, not only on the water but also in his own life.

“As well as being an excellent and improving sculler, Jake works with coaches and helpers to make sure the adaptive section moves forward and improves.

“We are massively impressed and encouraged by Shakespeare Lions’ outreach into the local community and especially the help and confidence it gives to young adults.”

Jake’s progress does not stop at the immediate accolade of being a Shakespeare Lions Young Ambassador.

He has been put forward by Shakespeare Lions for the regional competition and award and then hopefully onwards for the national award and attending the European Lions congress (Covid-permitting).