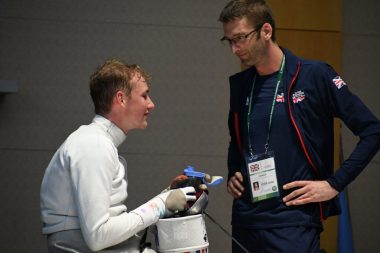 PETER Rome admits he is still coming to terms with being named High Performance Coach of the Year for 2020 at the annual UK Coaching Awards.

The Coventry native has helped lead the charge for an impressive Team GB haul that includes over 40 medals on the international stage in the previous two years – a return which has earned UK Sport funding for wheelchair fencing ahead of the forthcoming Paralympic Games in Tokyo later this year.

With hopes high ahead of this year’s delayed Games, Rome says that, while there is still room to improve on a personal level, he has been given extra motivation to help deliver success for Great Britain come the summer months.

“The shock is still settling in, it was an amazing ceremony even under the circumstances,” he said, referring to the virtual awards held in December.

“To still get the inspiration and see the depth of coaching within the UK was just phenomenal, it’s inspiring just to see all the presentations as it brought back memories of when I was a grassroots coach and worked in clubs and communities.

“It was inspiring to see what people have done [in 2020] to be a coach in this environment – to give that joy and that enthusiasm.

“To develop people through many different scenarios has been an eye-opener and it’s almost about what I can learn [from these coaches] as well, it makes me want to continue to develop.”

It was the introduction of Rome as Team GB’s lead coach in the sport in the six months leading up to the 2016 Rio Paralympics which played a part in Piers Gilliver claiming a silver medal – having lost out 15-13 to China’s Sun Gang in pool A of the men’s epee.

With fortunes on the world stage improving considerably since then, Great Britain have every chance of making 2021 a year to remember with Rome at the helm.

While the difficulties experienced in 2020 may still ring true in the coming months, Emma Atkins – the director of coaching at UK Coaching – believes the role played on an international, regional and local scale by British coaches deserves the highest level of praise.

“The three million coaches in the UK have gone beyond the call of duty to make sure participants didn’t lose momentum with their sport, physical activity goals and ambitions, or weren’t isolated from the social side of activity,” she said.

“They realised that for participants and indeed themselves, that coaching and staying active isn’t just a hobby or a pastime, it’s a way of life that deeply affects mental and physical well-being.

“Our message to the British public is not to forget to thank your coach for the positive impact they’re having on yours and other people’s lives – be kind, support one another and stay connected.”