The Stratford Boat Club member and three crew mates were yesterday (Thursday) preparing to set off on the Talisker Whisky Atlantic Challenge – the world’s toughest ocean endurance race – rowing 3,000 nautical miles from La Gomera in the Canaries to Antigua in the Caribbean.

Charlotte, a marine scientist currently working between Oman and the UK, will be joined on board the all-woman crewed Atlantic Endeavour by a sailing officer, finance expert and HR manager, as they attempt the crossing alongside around 30 other teams.

They will be aiming to break the current 40 day record for the the fastest four all woman crew to cross the Atlantic.

But it will be no cruise for the crew who will have to face sleep deprivation, blisters, salt sores and the simple physical and mental exhaustion which comes from rowing in gruelling two hours on and two hours off shifts around the clock for weeks on end, on top of the raw elements of the Atlantic.

In 1966 Sir Chay Blyth and John Ridgeway became the first men to row the Atlantic. During their 92-day passage they faced hurricanes, 50ft waves and a near starvation diet. Their trip laid the foundation for the biennial Talisker Whisky Atlantic Challenge, and to this day more people have climbed Everest or been into space than have successfully rowed the Atlantic, leaving 30 year-old Charlotte under no illusions as to the task ahead. 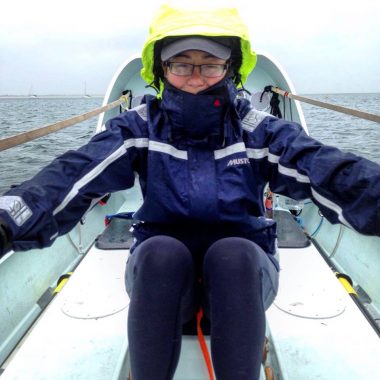 But the former Stratford Grammar School girl is no stranger to toughing it out.

Charlotte, who received her doctorate from the University of Southampton, said: “Day to day outside the office, I can usually be found cycling, running, swimming or exploring or sometimes baking cake! I have a love for challenges and adventures – this has led me to an Ironman finish, a series of coastal trail half and full marathons, 100 mile cycle rides and multi-sport racing across Scotland in a day. In early November 2015, I completed a one hundred and sixty mile multi-stage race through the Omani desert.

“As a former competitive rower and avid lover of the sea, the idea of rowing across the Atlantic is enthralling and exciting, yet terrifying at the same time.

“As a marine environmental consultant, most of my time at sea has been spent in a large, ocean-going oceanographic research vessel – a little different to a tiny four woman ocean rowing boat.

And Charlotte has been training hard in preparation to take on the Atlantic. During the row they will be eating mainly freeze dried meals – the sort eaten by mountaineers and those undertaking polar expeditions – to fuel a 6,000 calorie intake a day, but as they will be burning some 10,000 a day they will need to put on some weight before setting off in December.

Their boat – made of a combination of wood, fibreglass, and carbon fibre – is seven metres long by two metres wide – so there is not a lot of room.

The boat has a small cabin, which is the only protection against the might of the ocean and powerful sun rays. If the weather proves too much for the boat and it capsizes, all the vessels are able to self-right.

Rules of the race state once they have started, the boat cannot be repaired, or take on any more food or water during the crossing.

The boat is equipped with watermakers, which change sea water to drinking water, solar panels to power the GPS and other vital electrical equipment, and a tracking beacon to signal the boats location.

The Atlantic Endeavour crew will be raising awareness and funding for their two chosen charities – mental health charity Mind and Women for Women International, which highlights the daily struggles and inspiring strength of fellow women around the world. 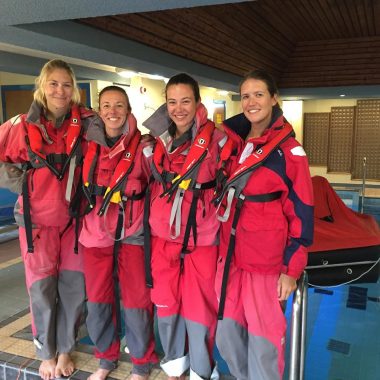