The flags of 52 historic counties are flying proudly at the heart of Government today (Friday, July 23) as the nation celebrates Historic County Flag Day.

All 52 registered historic county flags have been hoisted in Parliament Square in resplendent celebration as festivities take place in cities, towns and villages across the country.

The aim is to remind people of our nation’s rich history and is part of the Government’s mission to celebrate the traditions that bind our communities together and instil pride in the places we live as we build back better from the pandemic.

“Today is an opportunity to celebrate the rich tapestry of our shared national heritage.

“These flags represent local traditions and stories from every corner of Great Britain which people rightly take pride in.

“I am proud to see such an explosion of colour in Parliament Square on Historic County Flags Day in celebration of all that binds us together.”

Earlier this week, the Communities Secretary wrote to all councils across Great Britain, urging them to proudly raise their flag to celebrate Historic County Flag Day. 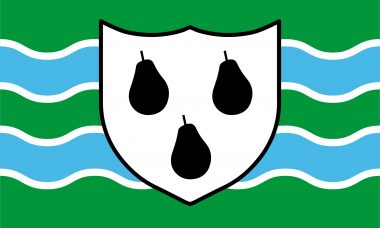 The Worcestershire flag (right) is the flag of the county of Worcestershire. It was registered with the Flag Institute on 8 April 2013 as the winning entry of a BBC Hereford & Worcester competition.

Designed by Elaine Truby, the flag features the county’s famed black pear (Black Worcester Pear) – a symbol reported to have been used by Worcestershire units at the Battle of Agincourt. Additionally a pear tree is seen on the local council’s arms. Three of these pears are seen on a shield charged against a wavy green and blue background. These latter colours symbolise the verdant flood plain of the River Severn as it runs through the county. The dark green hue is the colour worn by the county’s world famous cricket team. 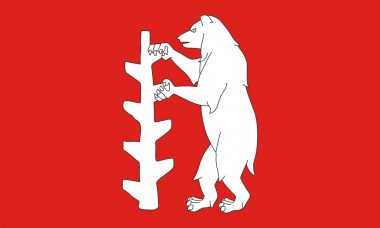 The Warwickshire flag (right) is the flag of the historic county of Warwickshire. It was registered with the Flag Institute in August 2016 as a result of a campaign that secured the support of a dozen county organisations plus the sanction of both the Lord Lieutenant and the High Sheriff.

The design features the traditional bear and ragged staff used in the county since the Middle Ages as a symbol of the Earls of Warwick.

The first recorded use of the two symbols was by the Beauchamp family, who became the Earls of Warwick in 1268, as a seal. This crest is still used by the earls today.

This year, there will also be two new additions to the historic flag line-up, with Leicestershire and Herefordshire including their new county flags for the first time. 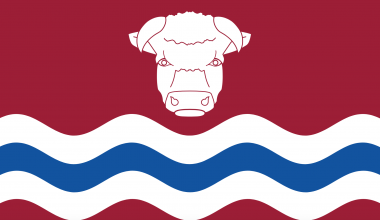 The Herefordshire flag (right) is made up of three famous symbols linked to the county: the dark red field, a Herefordshire bull, and the River Wye.

“This Historic County Flag Day will be an especially proud one for Herefordshire, with the county flag flown in Parliament Square for the first time. Our county is blessed with unique beauty, from stunning rivers to iconic orchards, and steeped in history, most notably the magnificent Hereford Cathedral which is home to the world famous Mappa Mundi and one of only four original copies of the 1217 Magna Carta.

“While we are proud of our rich history, our vibrant city, thriving market towns and rural communities are looking towards a future filled with promise, and we will play our part in Historic County Flag Day by proudly flying the county flag in Hereford.” 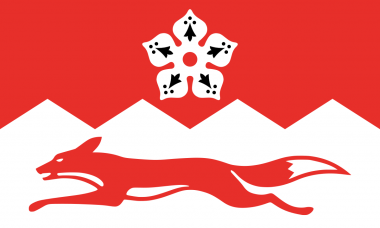 There are no registered or widely recognised county flags for Northern Ireland so the Union flag is flown at the head of the display so that all parts of the United Kingdom are represented.

5 expert-backed ways to bolster your immune system, as we approach cold and flu season