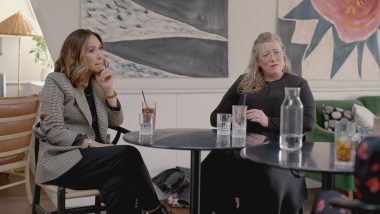 The musician and TV presenter, 43, revealed she had suffered four miscarriages while trying for a baby with her fiance Simon “Sim” Motson.

Myleene, who also has two daughters, Hero and Ava, with her ex-husband Graham Quinn, went on to give birth to a healthy baby boy, Apollo, in 2019. But now, in an incredibly powerful and emotional new documentary, she is opening up about the children she has lost, in the hope of breaking the taboo that surrounds the topic of miscarriage, and encouraging people to start honest conversations.

In the one-off film, we see her meet women around the UK to hear their experiences, and have revelatory heart-to-hearts with her daughters and Sim about their grief.

It’s a must-watch piece of television which also details surprising statistics and information about miscarriage, and the care and medical support that is currently given to women. Klass follows MP Olivia Blake as she heads to Parliament to raise findings from the Miscarriage Matters research – led by charity Tommy’s – with the then UK health minister Nadine Dorries.

Here, we chat to Klass about the vulnerable filming process, turning pain into power, and why change has to happen.

WHAT MADE YOU DECIDE TO SAY YES TO PRESENTING THIS DOCUMENTARY?

I kept saying, ‘I can’t do this’ – but that’s why you do have to do something, because you are so scared of it. I just thought, ‘If you do this, you have to be as honest as possible. You have to tell the truth’.

I want this to outlive me – and it will. I want my daughters to watch this, and their friends, and have conversations.

THERE’S A SCENE WHERE YOU DISCUSS YOUR MISCARRIAGES WITH YOUR DAUGHTERS. WHY DID YOU DECIDE TO INCLUDE THAT?

I wanted to show you’re not reckless bringing your children into these conversations. My girls are learning if you have sex, you get a baby; that’s not how it works at all. We are misinforming our children.

Ava went into school when they had the lesson about babies, and it ended up being a conversation about miscarriage. Her friends shared how it had happened to their mums or aunties; that is groundbreaking. They feel part of something. You are empowering them.

If you’ve been through miscarriage, you’ll know you have to write down the date it happened, the date that you conceived. You write down all this information; it becomes the most awful diary of dates. And it doesn’t stop there. Those dates don’t stop turning, whether you physically write the diary, or the diary is just in your head, or you just think, ‘I wonder what they’d be doing. I wonder who they’d be’.

WE ALSO SEE YOUR AUNTIE, WHO HAD KEPT HER MISCARRIAGE A SECRET FOR 37 YEARS, OPEN UP TO YOU…

She said to me, ‘It’s a shame that I’m the only person in my community that this happened to’. She still believes it’s only her! And I said to her ‘Honestly auntie, it’s not you, it’s one in four’.

In my group of friends, we’ve been through the same. It’s so awful but we literally pass the miscarriage baton between us as a friendship group. It’s harder for me to find friends who’ve not had miscarriages now.

HOW DID IT FEEL TO FILM TALKING SO FRANKLY ABOUT YOUR MISCARRIAGES WITH SIM FOR THE FIRST TIME?

This is very, very, very personal, and very vulnerable, and I think you cannot take for granted how much bravery you need to be able to speak like this. I’m sure there will be judgment on my relationship, but we weren’t avoiding each other. You almost have this dance, as a couple; you dance around each other, trying to protect each other with your love, rather than trying to trigger something.

WHAT DO YOU HOPE VIEWERS TAKE FROM THIS FILM?

There are many conversations that are happening at the moment, about women’s reproductive health and choices and about mental health and what we should be doing with our children’s health. But this conversation [about miscarriage] is not going on! And ask yourself why? Because it makes everybody uncomfortable. There’s just no way out of it, and maybe that’s what it is – it’s just uncomfortable. You can’t make a death better, but you actually can acknowledge a life.

IS BABY LOSS A TOPIC YOU’RE GOING TO CARRY ON CAMPAIGNING ABOUT?

Yes, very much so. There have been some incredible messages in my DMs. One woman messaged me, and she said, ‘I can’t tell anyone that I’ve had a miscarriage’. How awful, but how wonderful, to know that there are other people that can’t say the words quite yet, because that was me.

Myleene: Miscarriage & Me airs on W on Thursday, October 14

Problems growing your pumpkins? This is what you’re probably doing wrong