Almost a third of people working from home during the coronavirus pandemic wore pyjamas during virtual meetings, while one in 10 did not even put on a pair of trousers, according to a YouGov poll. 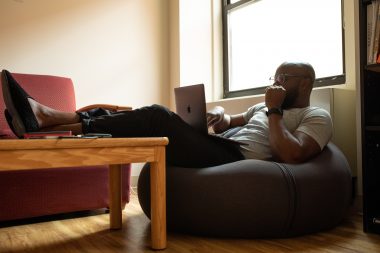 Findings suggest that around 42% of home workers have experienced “Zoom fatigue” since the pandemic began, though only 14% say they want to return to the office full-time when it is safe.

One in five say they never want to go back.

The research – commissioned by transcription app Otter.ai – comes 12 months after Prime Minister Boris Johnson told the UK an unprecedented lockdown would commence to prevent the spread of Covid-19.

A week earlier, the public was asked to start working from home where possible.

The move has led businesses up and down the country to evaluate the need for office space while employees reap the financial and time savings from no longer commuting, but it has come at the cost of isolation, particularly for those with smaller dwellings.

Of the 2,027 remote workers surveyed – which includes 1,012 from the UK – almost half (45%) would prefer a balance, going into the office between one and three days per week.

The number one reason given for continuing to work from home at least part-time was avoiding the commute (51%), followed by gaining flexible hours (34%).

Two in ten said they want to carry on working remotely because they get more sleep and 15% say they do not want to wear formal clothes.

However, workplace chatter is the most missed aspect of office life (43%), while poorer productivity is cited as the greatest impact by those who have suffered fatigue from video calls on Zoom and Microsoft Teams.

A third (31%) admitted to having private conversations with friends in the same virtual meeting, as well as wearing pyjamas (30%).

A quarter (23%) also confessed to shopping online during a call and 15% said they had played computer games.

“Our survey shows that work will never be the same as before the pandemic,” said Sam Liang, chief executive and founder of Otter.ai.

“Employees now demand a flexible and hybrid work set-up that meets the new work-life balance and changing attitudes created by working from home for such a long period.

“Zoom fatigue is real and meetings need to be adapted to suit our new working environment, whether that is fundamentally changing the structure of meetings or seeing employees engage with collaboration apps that help with meeting notes and allow the sharing of conversations in real time.”

Motoring: BMW M3 is still one of the best performance cars you can buy

Fancy a challenge? 4 incredible fitness feats to take on this year